Alrighty. If you liked the Glossary/Terminology h5p template, and you thought the Tab h5p template was ok, I’ve got a new one for you. My goal here was to set up an “Accordion” – style interaction, mimicking similar types of expand and collapse tools all the cool kids are using today. As I mention in the template, h5p does have a content-type for this, but you can’t customize it (well, not without getting into the code). 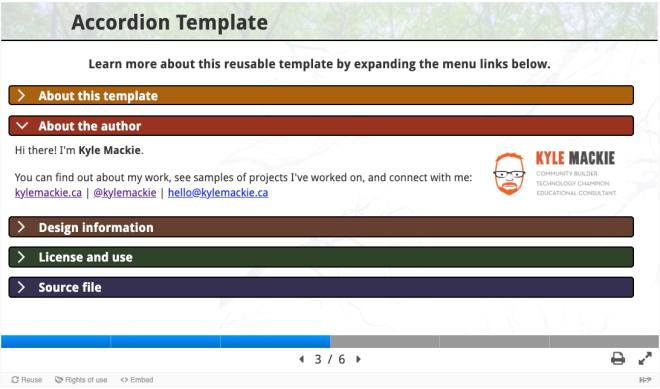 Thanks for the positive responses from my previous post. Sharing another template today. This one’s simpler, and probably easier to work with. This one is designed to have a Tab menu, so that you create a familiar and cohesive interface for the “sub pages”. 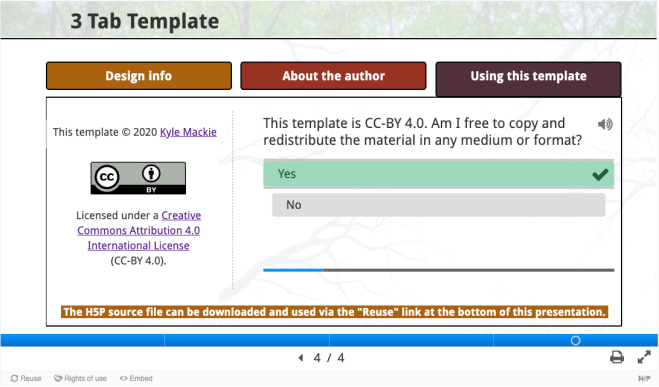 I’m excited to share the first of hopefully a few h5p templates for you to reuse, remix, and redistribute. I put this together for a current project, and I’ve removed any specific content or references from this downloadable version.

Let me know if this is helpful. I’m super excited about the potential of h5p. I’d love to hear about your use, so reach out if you want to chat more.

Over the next couple days, I’ll be participating in the 12th Annual Open Education Conference #OpenEd15: The Impact of Open. It’s a conference I’ve always wanted to attend, but for various reasons haven’t been able to make it happen. This year, we’ll make it work.

For folks at home, tune in to the live stream keynotes, and a rich twitter stream. Expect to hear some of the most forward-thinking learning professionals discussing how open open educational resources (OER) can dramatically improve the quality of education. At the risk of telling you what you should do, don’t miss it.

Since starting my consulting business 2 years ago, I’ve had the good fortune to work on a number of open educational projects. I’ve just “run the numbers”, as some of them say. Here’s where my income comes from: 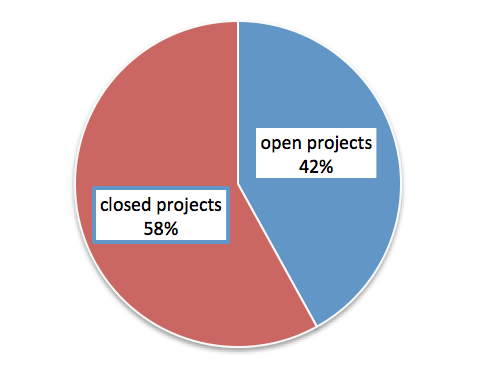 There’s good work be done. Links to some of these projects below. Let me know if you’d like access to any of the source files, or if you have any questions.

I hear the word “engagement” daily, at least.

The goal of having engaged learners, an engaged staff, an engaged team working on a project is an great one, and once met, there hopefully be success and happiness. I’d suggest, however, that there’s great value in moving the goalposts a bit, and considering the difference between engagement and investment. I think the difference is more than semantics, and more than just a tweak. I think that if the goal is “engagement”, the project will hopefully be successful, but if the goal is “investment”, the project surely will be.

A proposed continuum (and the spacing is deliberate):

This is an interesting step in data management and analysis and predictive analytics in education. I think what this brings to the front is that analytics is very much a business application, and that applying it to learning changes the education game, considerably. I’m not saying that it’s all bad. In fact, I think there can be a lot of good in it. With any discourse around this, I feel compelled to throw in a couple “let’s be cautious” and “consider the implications” type comments. I’m excited by predictive analytics. They’re neat, and I love all the pretty graphs. Should IBM and D2L be making conclusions and interventions based on the mass of data available? What are the implications and potential pitfalls of having edu-business-borgs making conclusions and giving advice? Consider what can’t and shouldn’t be counted. Let’s be sure to question the robots when they make decisions based on logic like this:

“Writing obscures language; it is not a guise for language but a disguise.”
– (Saussure, Course in General Linguistics)

In September, I started to experiment with voice recognition software. The results were interesting, humourous, and inaccurate. I wrote a post about it on the blog I set up for my graduate research. At the time, I was experimenting to see what it means to capture the analytics of performance (or here, speech) to be replicated later. This experiment resonated with some of the work I’ve done in the past couple years with accessibility, speech recognition and voice commands.

Apple’s new iPad (generation 3), has a Dictation option. The features page, suggests that:

Write an email. Send a text. Search the web. Or create a note. And do it all with only your voice. Instead of typing, tap the microphone icon on the keyboard. Then say what you want to say while your iPad listens. When you’re done, tap anywhere on the screen and, just like that, your spoken words become written words. Dictation also works with third-party apps, so you can do things like update your Facebook status or share a thought on your Twitter feed.

Interesting stuff. Now, before you jump on board, read this post and consider what information you might be sending and storing on Apple’s servers.

I’ve been experimenting with this dictation feature for the past couple weeks. On Monday, I lost a fight with the dandelions in my backyard. As a result, I’ve thrown my back out and I have difficulty sitting for an extended period of time. So, I’ve been using the dictation feature to answer emails, send out tweets, and I’m using it right now to compose this post. It seems to work pretty well.

I was showing it off to my kids this morning as replying to an email from a friend of mine. I asked my five years old son if he wanted to try it out. So, I suggested he say, “Looking forward to seeing you.” Somehow things got a bit garbled…and the result?

I’m not entirely sure what that means, but it resulted in me having to change my shirt when coffee came out my nose.